Mark Robson’s ’67 film version of Valley of the Dolls (novel by Jacqueline Susann) is a very hokey show-biz drama, more interesting than good.  As millions are aware, poor Sharon Tate is in the film, but hers is not the only unsatisfactory acting.  Barbara Parkins (as the heroine) and several others are no better.  Patty Duke, on the other hand, is disturbingly successful as big star Neely, the meanest Lindsay Lohan in American cinema.

To my mind Dolls is a guilty pleasure, whereas to someone else it would be simply trashy.  So be it.  It interests me that it’s pure mid-Sixties, with its coy sex, attention to American prosperity, Jack Jones-like singer, etc.  What’s more, the film’s last few moments are pleasingly strong. 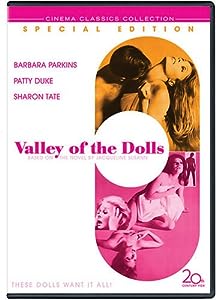 Cover of Valley of the Dolls (Special Edition)