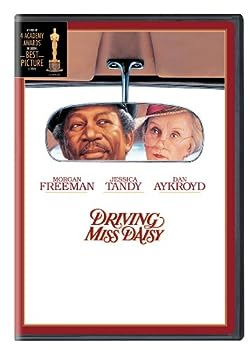 Bruce Beresford often fashions wonderful endings for his movies, and Driving Miss Daisy (1989) is no exception.  Nowhere does the film display more heart, more humanizing feeling, than in its last sequence.  The feeling doesn’t seem as legitimate as that in, say, the Taiwanese picture Eat Drink Man Woman because Miss Daisy (Jessica Tandy) is not quite as sympathetic a character as those in Ang Lee’s film; she doesn’t change much in the course of the piece.  She is scrappy and sharp-tongued from start to finish, but that in no way means we don’t like her, don’t care about her, and a moving ending is a moving ending.  The one encouraging fact about her is that she ultimately acknowledges her black chauffeur, Hoke (Morgan Freeman), as her best friend.  Miss Daisy is a white Southerner.  She’s also Jewish, though, and seemingly less inclined toward racial pride and prejudice than many, or most, Southern white Gentiles.  She and her grown son Boolie (Dan Aykroyd) are liberals in the Fifties and Sixties.

Written by Alfred Uhry and based on his play, Daisy is minor Beresford but, like his Breaker Morant, beautifully transferred from stage to screen.  The Aussie’s directorial care is a pleasure to behold even in a comparatively unambitious work like this.  On the minus side, there is an excess of music; on the plus side, it is a family film.  I am persuaded to add, however, that as I watched Miss Daisy, et al. grow older and thus slow down as the years advanced, as I watched Miss Daisy’s increasing fragility, I was saddened to think of all of us having to live in a fallen world of irreversible time.