“Ace in the Hole”, Skulduggery At The Mountain

The 1951 Billy Wilder film, Ace in the Hole, is one of those wherein Wilder expresses his anger over deception and skulduggery, the bilking of the innocent or vulnerable for the sake of money or prestige or sex.  A newspaper reporter (Kirk Douglas) “befriends” a man trapped under rocks during a mountain cave-in, but cruelly arranges for a third-rate rescue operation in order to prolong the man’s predicament.  This, the reporter believes, will make for a more important scoop, one that will possibly guarantee for the gent a New York City position.

That the lousy rescue plan is devised is not quite credible, and, unlike other Wilder films, Ace is disturbingly gray, chilly.  Even so, it is one of his best.  The whole of Wilder’s personality is evident in it; it’s intelligently cynical and morally meaningful.  Neither Wilder nor Douglas makes the reporter a caricature; the former aims for too much unHollywood-like honesty to commit such an error. 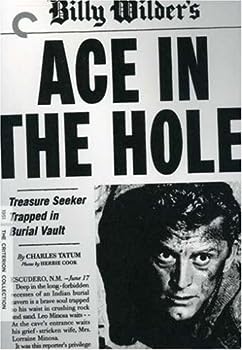 Cover of Ace in the Hole – Criterion Collection