The forgotten The Grissom Gang (1971) was directed by Robert Aldrich, maker of Kiss Me Deadly and The Dirty Dozen.  What could have been a decent crime flick-cum-1920s period piece lacks the finesse of the morally offensive Bonnie and Clyde, even if it has its stirring dramatic moments and a gripping denouement.  Based on a novel by James Hadley Chase, the film stars Kim Darby as a society girl kidnapped and held for ransom by a Barker-family simulacrum headed by Ma Grissom (Irene Dailey), mother of the likes of Slim Grissom (Scott Wilson), who begins to love the society girl.  Besides being clumsily directed and edited, the film is uneven in tone:  Levity arises only to be cast down by ugly bloodshed.  Grissom is would-be Peckinpah—and an odd duck to boot.

I’ll say this:  it isn’t at all boring.  Get a load of the actors.  Scott Wilson plays a repulsive character repulsively.  Miss Dailey is over-the-top and just plain odious.  Miss Darby, however, is excellent.  Often called upon to be emotional, she never simply huffs and puffs, never exaggerates.  She can be frantic but also moving, and is believable as an heiress.  Fine, too, are down-to-earth Robert Lansing and handsome, intimidating Tony Musante.  Why, though, did all the actors have to be coated with perspiration under the klieg lights?  Every time there is a closeup we see this perspiration.  It is yet another thing that demonstrates the film’s slipshod execution.  I’m glad The Grissom Gang is on DVD but only because of Miss Darby’s performance. 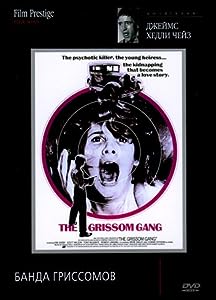