An Almost Unbearable Mistake: The Movie, “The Unbearable Lightness of Being”

The first time I read Milan Kundera’s novel, The Unbearable Lightness of Being, I enjoyed it; when I started it a second time I was bored—an effect I don’t think any of the great classic novels of earlier decades would ever have on me with further readings.  In some measure this may be because I don’t accept that an “unbearable lightness of being” exists, or might exist, as Kundera does.  As a Christian I believe that being has decisive weight, which is another way of saying it means something.

However, even if it didn’t, Philip Kaufman’s 1989 adaptation of the book is not the film to convince us of it, of anything philosophically dark and enigmatic.  The novel is suffused with thought; the film is only superficially thoughtful.  For example, only once or twice is the titular lightness mentioned, which is hardly enough for the concept to be dramatically emphasized.  Like the book, the film gets boring, though only after the first hour and a half, and the mitigation of this boredom, I must admit, comes with the occasional nudity and sex.

But via these elements Kaufman says virtually nothing; he just thinks he says something.  A nexus between sex and thematic meaning seems as wispy here as the shots of the 1968 Soviet takeover of Czechoslovakia are fancy and cloying—wretched, in fact.  The movie was a mistake. 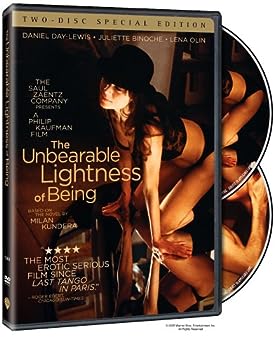