Before There Was “The Tudors”, There Was France’s “Queen Margot”

The 1994 Queen Margot, adapted from an Alexandre Dumas novel, is about Margaret of Valois (Isabelle Adjani), who during the 1500s was forced to marry Henri the King of Navarre (later the King of France) in the midst of post-Reformation violence and conflict.  The marriage is essentially no good; as in life, Margaret—Margot—has her lovers, and so does Henri.  Yet the Catholic Margot feels compelled to save the Protestant Henri’s life after Margot’s evil mother (Virna Lisi) engineers the massacre of the Huguenots on the eve of St. Bartholomew’s Day.  It’s a famous horror in French history.  Even after this, Henri remains a marked man since he desires the French throne, while Margot gets together with another man she must try to protect: La Mole (Vincent Perez), her newest lover.  He too is a Protestant.

The film is a vivid and bloody historical drama with a dark screenplay by Daniele Thompson, et al.  The direction by Patrice Chereau is generally sensible and brave.  In the world of Queen Margot, some needed relief emanates through loyalty and through love affairs, but largely there is the chaos of perilous times.  What is practiced is the politics of death.  We might as well be in Ukraine during the Stalin era.  People are fearful, moving with a liveliness that demonstrates the need to escape. . . The movie ends with nasty Anjou, one of Margot’s brothers, poised to take the throne after the death of Charles IX and commenting to his mother that now, in the kingdom, hatred shall come to an end.  Empty optimism, I’d say. 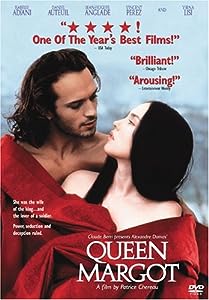