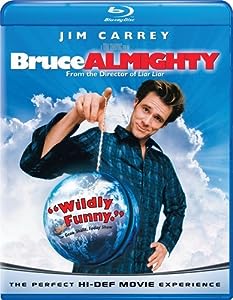 In 2003’s Bruce Almighty, God, played by Morgan Freeman, explains to Jim Carrey that if only people realized that not only God but they too possess power, they wouldn’t need to pray as much as they do and everything would be . . . whatever.  Never mind Bruce‘s theology:  it’s a big zero.  As is the hilarious but atrocious writing from Steven Koren, Mark O’Keefe and Steve Oedekerk.

A Buffalo, New York TV reporter, Bruce (Carrey) yammers about God and all the misfortune he faces until the Almighty, fed up, decides to endue Bruce with His own miracle might and see what kind of job he does as Supreme Ruler.  What he does for self-gratification is a howl, but it isn’t long before illogic and desultoriness stain the story.  So does sentimentality:  Bruce is the most syrupy comedy since Patch Adams (1998), both of which films were directed by the same man, Tom Shadyac.

Bruce Almighty raked in the almighty dollar when it was released, despite being a foolish wreck.