An often disappointing artist, David Mamet is also a talented one.  As well, he is now a conservative—and was probably leaning toward conservatism as long ago as 1999, the year he released his dandy film adaptation of Terence Rattigan’s play, The Winslow Boy.  The hero here is Sir Robert Morton, a respectable conservative barrister who has proven to be solidly anti-feminist and anti-trade union.  Jeremy Northam plays him with graceful intensity, enviable poise, even a spark of eccentricity.

It is he, Sir Robert, who must clear the name of  the young brother of a dignified suffragette (Rebecca Pidgeon).  Ironically, this conservative barrister begins to condemn “the great” as they side against “the powerless,” as though he were a liberal—the great being the Crown and, probably, the English press.  (The Winslow Boy is set in early 20th century England.)

Mamet’s film is knowingly directed, finely photographed, and well acted.  This movie and his follow-up picture, the rather vulgar State and Main (2000), evince what an interesting man Mamet is.  I look forward to seeing his HBO film about Phil Spector. 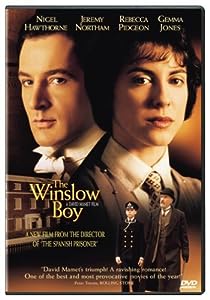 Cover of The Winslow Boy