I think it’s only a matter of time before Fatal Attraction (1987) starts aging poorly in a way an entertainment movie such as Hitchcock’s Psycho has not.  Psycho, after all, is better written than FA.  Director Adrian Lyne had better material with his remakes of Lolita and the Chabrol picture The Unfaithful Wife.

Alex Forrest (Glenn Close) is an arrantly insane career woman whose evil is sometimes baffling.  All the same, her shenanigans are filmed by Lyne in some strikingly well-done suspense scenes, such as the one with the rabbit.  The directing is nearly as impressive as Close’s penetrating performance.  Fatal Attraction is entertaining without being truly good. 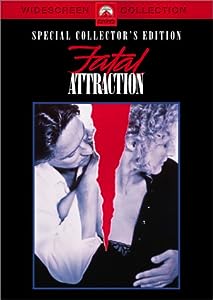