French Film Ain’t What It Used To Be: “Man on the Train” 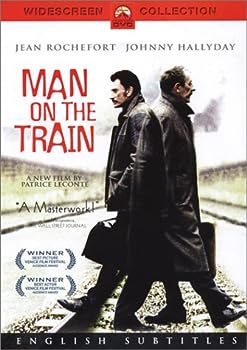 Cover of Man on the Train (L’Homme du Train)

In 2004’s Man on the Train, Jean Rochefort plays Manesquier, a bachelor who offers lodging to, and befriends, a middle-aged bank robber named Milan (Johnny Hallyday).  Friendless and lonely, Manesquier finds himself secretly longing for the kind of gutsiness and abandon he sees in Milan, who, for his part, warms to the quiet conventionality that the old bachelor is beginning to hate.  Each man nigh unconsciously slips into behaving a bit as the other man does.  A kind of desperate role-playing, this, while the routine danger of death abides (Manesquier has health problems).  However, both men go to their individual fates—in screenwriter Claude Klotz’s almost nihilistic vision of the world.

Ingenious for its characterization, dialogue, direction (by Patrice Leconte) and cinematography, Man on the Train is nonetheless, sadly, a failure.  James Bowman has rightly commented on the film’s “willingness to romanticize criminals,” i.e. Milan.  Watch the film from beginning to end and you’ll see what Bowman means.  That’s bad enough, but another thought provoked is that of whether an aging intellectual would ever really envy an outlaw’s life.  Yet whether he would or wouldn’t, the matter ought to be examined with a more acceptable climax and denouement than  Klotz has purveyed in this movie.  That denouement is all that keeps Train from out-and-out nihilism, and it’s lousy.  Over and above, the film is thin and rather talky, not unlike Ingmar Bergman at his worse.

Leconte’s direction is tasteful and painstaking.  Klotz’s screenplay leaves much to be desired, but at any rate his dialogue is terrific.  No admirer of the music of Schumann, Manesquier nevertheless says he likes Schumann because he “appeals to my love of failure.”  In another sequence Milan, substituting for Manesquier in the tutelage of a boy, praises a fictional character, Balzac’s Eugenie Grandet, because she waits and waits for her fiance’s return.  Says the bank robber, “I think she’s magnificent.  People nowadays don’t have that kind of patience.”