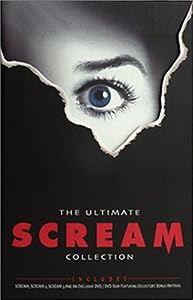 Scream 4 (2011) has Sydney Prescott (Neve Campbell) returning to the town of Woodsboro only to start witnessing, darn it, a new crop of brutal murders at the hands of “Ghost Face”.  The story here is stupid and there is so much carnage it gets tedious, but that doesn’t mean Wes Craven’s film is a loser.  To me, it’s gruesomely entertaining and intermittently clever, as witness the doings at the teenagers’ horror-movie marathon.  And if you don’t like the offensive publicist played by Alison Brie, well, screenwriter Kevin Williamson has no sympathy for her, that’s for sure.

Scream 4 is a deliberately self-aware horror flick (as was the first Scream; I didn’t see the other two), but self-awareness and graphic violence is not a good combination.  There’s a certain cheapness about it.

One review I read declares that Craven’s movie has something to say.  I disagree.  It has nothing to say.  It’s just there to entertain.  Indeed, I’m glad there is absolutely nothing political about it.