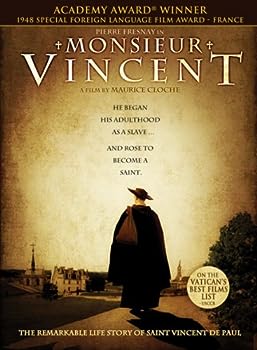 The year is 1617, and a new priest, Vincent de Paul, arrives in a French town which has had no priest for a long time.

It shows.  One of the themes of the 1947 biopic, Monsieur Vincent, is the demanding struggle of the clergyman to tame the unchurched, the brutish, the shallow.  Father Vincent’s first stop in the little town is the filthy, abandoned local church, an enormous hovel with cobwebs.  Many, not all, of the townspeople are dirt poor, and Vincent, formerly a priest in Paris, wishes to live with and help them.  At first they are also sorely afraid of a nonexistent plague.  The sequence in which Vincent holds a funeral service for a woman thought to have had the plague, while a crowd of reluctant people walks up and starts crossing themselves, points up a European Catholicism still perfectly imperishable, of course, in the seventeenth century.  Director Maurice Cloche handles this scene, and all the other scenes, as he ought to have.

The best handling is by the playwright Jean Anouilh, who wrote the script, purveying such other themes as the question of what to devote one’s life to and the rich’s responsibility, if any, to the poor.  With flair Pierre Fresnay enacts Vincent, and the good costumes make us wish the film was in color.  All in all, a worthy motion picture.