A Joyce Maynard novel based on a true story about a woman who persuaded her teen lover and his friends to murder her husband became, in 1995, a good film adaptation titled To Die For, with direction by Gus Van Sant and a screenplay by Buck Henry.  Here, the murder of a husband occurs but differs from life in that there exists the lure of the trivial and the brummagem (or does it differ from what went on in life?)—i.e., becoming a professional Television Personality.  This is what Suzanne Stone is consummately ambitious for; she loves the thought of being on television more than anything else, including her affectionate and humble husband.  He wants children, she doesn’t because of her career, and since she begins to see him as a hindrance, she coaxes a teenage boy into sex and then murder.  As well, she agrees to pay the boy’s helper, another teenager, a thousand dollars and some CDs for his part in the murder, but never comes through.  She spurns her adolescent partners after the dirty deed is done, completely apathetic to her crime.

Some of Henry’s humor here is unfunny, but the sardonicism has a way of winning us over and the film never shrinks from facing the sheer iniquity of Suzanne’s doings.  Along with assailing the media, it hammers one nail after another into the murderess’s coffin.  It insists on justice, not mercy.  But it does this, I might add, sans a trace of sanctimony or misogyny.

Nicole Kidman is poised and, playing an airhead, amusing as Suzanne, and is neither actorish nor by-the-numbers.  Van Sant provides dazzle but knows how to restrain himself in his direction, and Danny Elfman’s biting, mercurial music is one of the film’s best features. 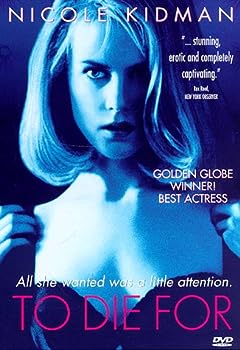 Cover of To Die For