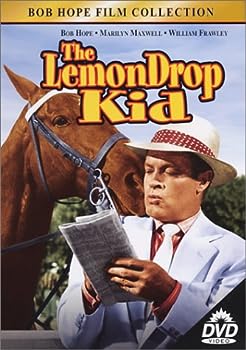 Cover of The Lemon Drop Kid

A talented Bob Hope stars in The Lemon Drop Kid (1951), and although much of it is funny, I don’t consider it a successful movie.

Hope’s character is a chiseling skunk who is only a little less than a chiseling skunk at the flick’s end.  Naturally he has a girlfriend but the actress who plays her, Marilyn Maxwell, is charmless. . . The movie lacks what marked a lot of American screen farces of the Thirties and early Forties: likable characters and, whether the narratives were any good or not, likable scripts.  The script for It’s a Gift is indifferently plotted but still likable, still palatable.  Those words don’t describe the script for The Lemon Drop Kid.