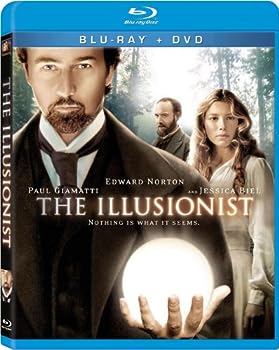 Cover of The Illusionist [Blu-ray]

Edward Norton is The Illusionist in a 2006 period film by Neil Burger.

I got bored with Steven Millhauser’s short story, “Eisenheim the Illusionist,” and so stopped reading it.  I’m glad it was transferred to the screen, however, for there is much to love in this curious movie.  Norton’s Eisenheim works as a mind-boggling illusionist in 19th-century Vienna and is in love with Sophie von Teschen (Jessica Biel), the aristocratic inamorata of a callous prince (Rufus Sewell).  Illusions are everywhere in the film, all performed by Eisenheim—unless the illusions are real.  Burger keeps us guessing.  What the whole of Vienna believes to be reality, in fact, turns out to be a happy falsehood.

The film uses a couple of the iris-outs so appreciated by director Francois Truffaut, and indeed The Illusionist greatly resembles Truffaut’s period pieces, e.g. The Story of Adele H., though without the customary charm.  Cinematographer Dick Pope’s lighting cannot be improved on; truly the film has a look.  Prague nicely stands in for Vienna, and the costumes of Ngila Dickson are unpretentiously agreeable.  Philip Glass’s score is respectable if sometimes shopworn.

The film is entertaining as well as marred by plenty of flaws.  For one thing, it’s a bit plebeian, and for another, I wish Jessica Biel’s acting had more sparkle, more imagination, for all her good looks.