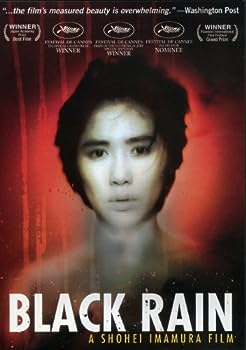 Japan’s Black Rain (1988) is about disease.  And Hiroshima.  The disease is radiation sickness, ergo the cause is the bomb.

The film begins on August 6, 1945, when Hiroshima got it in the neck, and a more horrid city catastrophe you will not find in a movie, albeit to his credit director Shohei Imamuri does not rub our noses in it.  Several screen minutes later, it is 1950 in a prosaic Japanese village; inhabitants live their quiet lives there.  But, tragically, many of these inhabitants were in or near Hiroshima five years ago, and some are getting ill.  The film’s narrative, adapted from a novel by Masuji Ibuse, is pivoted on an aunt’s and uncle’s efforts to marry off their 25-year-old niece Yasuko (Yoshiko Tanaka), about whom there are village rumors that she too is ill.  The aunt and uncle have radiation sickness, but what of Yasuko, who was never actually in Hiroshima?  Are the aunt and uncle lying to themselves in thinking their niece may be physically fit for marriage?

For two full hours Black Rain gives us much to see and a goodly amount to think about.  It is reticently angry, hating the weapons of warfare (with no vicious Japanese soldiers appearing); it is bleak and compassionate.  Some of the finest scenes include the one where, outside Hiroshima in a boat on a river, Yasuko’s young face gets spattered by the titular “rain” that is the result of the awesome explosion.  And the one where Yasuko’s aunt, so sick she is hallucinating, imagines she sees four men whom radiation sickness has already killed brazenly opening the windows of her home.  Too, a semi-charm emerges in the scene where a brash young man kisses and tells Yasuko that he loves her (before losing his balance on a pile of rocks he is standing on), but no charm at all can be found—of course—when, some time later, Yasuko examines her face in a mirror, looking for evidence of the malady.  And does she think she sees it?

Imamura has done superlative work here.  Since I haven’t read Ibuse’s novel, I can’t say whether the film does justice to it but it immediately makes you suspect that it has.  One takes pleasure in being unable to detect hardly any artistic flaws at all, certainly no serious ones.  It reminds us of the greatness of the most skillful Japanese films.