I doubt that this is Charles Dickens’ Nicholas Nickleby, but I can’t say since I’ve never read the novel.  On its own, however, Douglas McGrath’s film is palatable and admirably directed.  Nearly as dandy as the mature dialogue is Rachel Portman’s soothing score and Ruth Myers’s realistic costumes as all three serve the tale of a good man surrounded by shocking avarice and self-interest.

A measure of charm but not much else, I’m afraid, comes from Charlie Hunnam in the title role, and the same is true of Anne Hathaway as the girl Nicholas loves.  I dislike Jim Broadbent’s crude voice in the part of schoolmaster tyrant, but he himself is convincingly wicked.  Then there’s Christopher Plummer, as Nicholas’s uncle, moving from serviceable to authoritative, and Tom Courtenay is also first-rate.  For the most part the cast is distinguished in this not great but good tragicomic film. 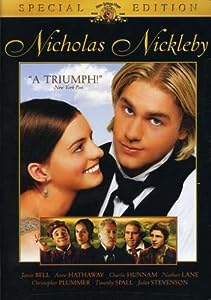