In Jason Reitman‘s smart, racy and delightful film, penned by Diablo Cody, Juno (Ellen Page) is a scrappy but sensitive teen girl who initiates sex with her male chum Paulie (Michael Cera) and afterwards gets big with child. She can’t bring herself to have an abortion but is too young to parent, so adoption is the only alternative. END_OF_DOCUMENT_TOKEN_TO_BE_REPLACED

The Tracey Fragments is a movie reviewed for ya by my bro Dean D.  Check it out and see if you agree. I plan on it. Especially since I never even heard of it. 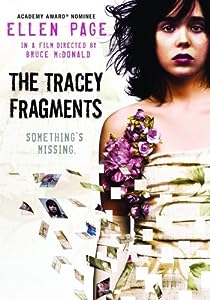 Cover of The Tracey Fragments

Ellen Page stars as Tracey Berkowitz, an anguished, bullied, self-hating Canadian teenager in a film improbable and extravagant. Page’s acting is incisive, but her character is burdened with parents who are arrant fools, both of them, and she herself goes off to search for her much younger brother, Sonny, who has been missing for two days. It must be said it seems a hopeless quest: how does she know he wasn’t abducted? And get this: he disappeared after Tracey hypnotized the boy into thinking he was a dog! Tracey is mercilessly bullied by girls and boys alike. What, really, is behind this? Even her temporary boyfriend ends up being mean to her. Maureen Medved’s screenplay leaves the impression that no one likes the fact that Tracey has no breasts.

The next subject is the work of director Bruce McDonald. His multi-frame procedure, with freeze frames, distortions, repeated snatches of speech, etc. hauled in, is actually multi-frame artiness. Rarely was I pleased with it.