The 1993 “Life with Mikey” is a Comedy Better Than Most

To me, the family-friendly movie Life with Mikey (1993) is entertaining, primarily because Marc Lawrence’s script is studded with nifty one-liners handily uttered by Michael J. Fox and Nathan Lane.

This is the one about an affable but lazy good-for-nothing (Fox) who used to be a popular kid TV star and now co-owns a talent agency for children.  His negligence toward the agency dissipates only upon his discovery of a brainy female scamp with claws, whom he wishes to turn into an actress.  For a while Lawrence makes this scamp, Angie, a liberal’s paragon of virtue, but happily the twaddle does not last.  Angie becomes a little more believable, even if there is no real substance to the film’s happy ending.  Fox’s life, after all, is supposed to be going “downhill.”

James Lapine directed and, although he did okay, he allowed Christine Vidal to play Angie mechanically.  The other child actors had a better sense of what to do and may have therefore needed little guidance. 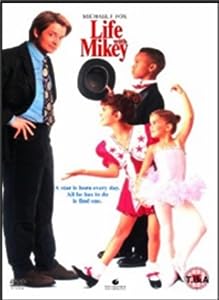 Cover of Life with Mikey