The Bank Job – Based on a True Story?

The Bank Job is a film directed by Roger Donaldson.  My bro Dean D. wrote a review of it….Check it: 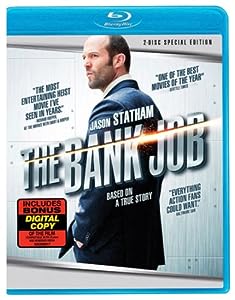 Cover of The Bank Job

Directed by Roger Donaldson, the film is a quite enticing caper-thriller starring Jason Statham and Saffron Burrows, and, no, it isn’t the brief shots of nudity (Princess Margaret’s!) that make it enticing. Or, er, it isn’t merely that.

It has more to do with fast editing and dialogue and a fun, interesting cast. But, oh, is it preposterous!

I ask because I must advert to something else in their crazy script. Statham plays a thief married to a nice, attractive woman. He and his mugs rob the bank, and Burrows, an accomplice, goes along for the ride. Eventually she and Statham share a passionate kiss, and not long before the movie ends, Statham’s wife realizes she has been cheated on.

Does she leave the man? No. She gets angry, but she speedily accepts what he has done, ALL he has done. Statham smiles at her and she at him. In other words–we’ve seen it plenty of times before in the movies–a man’s wife has to eat manure. Period.

I hardly find this respectable and I am more of a fan of Saffron Burrows than of Susan Faludi.