Since I am displeased with the review I wrote for the 2008 French film, The Class (or Entre les Murs), I wish to supplant it with the following:

During the Aughts, Laurence Cantet adapted a French novel titled Entre les Murs for the screen.  Called in the United States The Class, it’s a gem of a picture, set in a Paris inner-city school, which has no faith whatsoever in multiculturalism and very little in urban public education.  The novel was written by the schoolteacher, Francois Begaudeau, who plays the lead role–that of schoolteacher Francois Marin–in this film.  Though dedicated, Marin is not nearly as effectual as a pedagogue should be:  the school is a multiracial semi-horror.  There is constant disrespect and constant egalitarian sensibility.  Absurdity involving meetings and student representatives paves the way for Marin’s losing his temper and telling two misbehaving girls, the student reps, that they behave like “skanks.” He never apologizes.

The movie invites us to wonder just what kind of country France will be in the future.  The liberalism underlying multiculturalism seems unsustainable.  Yes, you can get a student expelled from Marin’s school, but can you get a satisfactory education re-admitted? 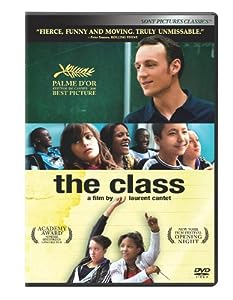