In the 1950 John Huston film, The Asphalt Jungle, we get an idea of what society is up against when a witness is too scared to finger the petty thief Dix Handley (Sterling Hayden) in a lineup.  Afterwards, however, conditions prove to be even worse when we learn that the cop who questions the witness is, unlike the other city policemen, on the take.  The “asphalt jungle” is not quite a jungle in this subdued caper movie, but it isn’t pretty either.  All the same, the jewel heist the film is pivoted on slowly becomes undone due to fortune and human weakness—and desperation on the part of the lawyer (Louis Calhern) enlisted to fund the heist.  Interestingly, it is in fact the seedy nightclub owner (Marc Lawrence) who funds it: money comes from all kinds of sources.  It need not be the gentry member who provides it.  He, truth to tell, might be perforce brought down to the shabby guy’s level.

Huston did ace work with compelling material in Jungle, made with Maltese Falcon sophistication and restraint.  Indeed, it outdoes Falcon in incisiveness.  What characters, what a cast!  Calhern has a perfect voice and a humanizing competence.  Hayden’s Dix is appealing in his masculinity, and likable enough that we scratch our heads over what police commissioner Hardy says about him. 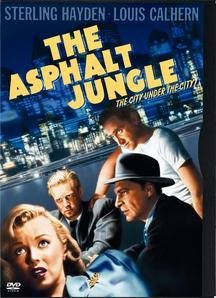 Cover of The Asphalt Jungle