Truth in John Updike’s Fiction: “Made in Heaven” & “Augustine’s Concubine”

In the John Updike short story, “Made in Heaven,” written in the Eighties (and from the collection titled Trust Me), something important is concentrated on.  The piece chronicles the years of marriage between Brad and Jeanette Schaeffer, and it begins with the words, “Brad Schaeffer was attracted to Jeanette Henderson by her Christianity . . .”  Christianity, or something like it, is there, to be sure, but it doesn’t last.  The “something important” which happens is that unbelief masquerades as belief, for a long time.  It’s an unbelief afflicting both Brad and Jeanette, who seem unable to do anything about it, and I myself certainly suspect they can’t.  Can it not be said their minds are being blinded—yes, blinded—to the light of the gospel?  (See II Cor. 4:4.)  To me it can, notwithstanding this is hardly a point Updike is making.

What is doubtless true is that “Made in Heaven” reflects the erosion of Updike’s own recognized faith in orthodox Protestant doctrine.

It’s in a story such as “Augustine’s Concubine” that Updike introduces us to true believers, converts.  A 1970s work included in the collection, Problems and Other Stories, “Concubine” revolves around the love life of Augustine and of his married lover before Augustine’s conversion in the fourth century.  And before hers.  Updike makes it seem inevitable that Augustine will surrender to God, but not that she will.  Yet she enters a cenobium.

What comes about after all the illicit sex is not only chastity but also asceticism (“She, too, could taste the dry joy of lightness, of renunciation”).  A tribute to the former concubine concludes the story:  “She was a saint, whose name we do not know.  For a thousand years, men would endeavor to hate the flesh, because of her.”  What comes about, then, is a history of (Catholic) chastity and asceticism, something Updike, with his understanding of people’s faith in orthodox doctrine, sympathetically presents. 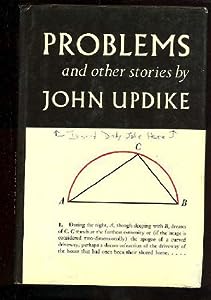 Cover of Problems and Other Stories