Based on the novel by Brian Moore, author of the film version’s screenplay, Black Robe (1991) deals with French missionary efforts among the Algonquin and Huron Indians in the 17th century.  Lothaire Bluteau is miscast as the Jesuit priest Father Laforgue merely because his acting is poor, but this Bruce Beresford-directed movie has plenty of good qualities.

It quickly becomes evident that Laforgue, a virtuous man, is failing miserably to establish a rapport with the Algonquin Indians on whom he depends to take him to the Hurons—a fact that prompts Moore to throw doubt on the value of missionary work at large.  Christianity itself has intrinsic worth, but to Moore (no friend of Catholicism) it is impossible to say it’s a metaphysical worth.  Though he remains a Christian, Laforgue makes concessions to pagan Indian belief (the forest is speaking to us, don’t ya know?).  Thus it isn’t just the acting in BR that makes me wince. 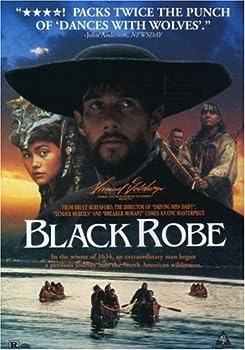