A man (Karl Malden) foolish enough to marry a teenage girl many years his junior resorts to bullying and violence.  He lives, it must be said, in humiliation, for his wife Baby Doll (Carroll Baker) does not love him and refuses to consummate the marriage until she turns 20.  Moreover, through a stratagem on the part of a business rival (Eli Wallach), Baby Doll becomes infatuated with the rival.

The 1956 Baby Doll, written by Tennessee Williams, was directed by Elia Kazan, who gladly called the film “unrealistic.”  We mostly believe in its unrealism, though, except when the story grows hyperbolic, hysterical.  That’s when we see its basic trashiness, also engendered by bits of third-rate directing by Kazan, as in the big fire sequence.  To me the film is a guilty pleasure, but nothing more.  It is only partly well acted, by Baker and Wallach. 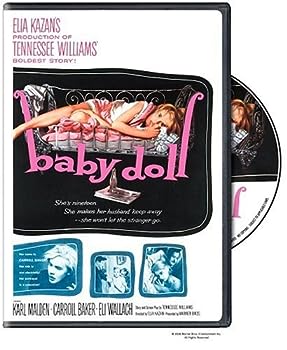