“The Stoning of Soraya M.” in all its horror – A Movie Review 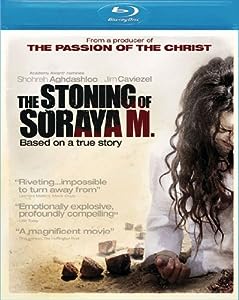 2009’s The Stoning of Soraya M., directed by Cyrus Nowrasteh, dramatizes the true story of a woman who was victimized in an “honor killing” in an Iranian village.  The charge of adultery against Soraya was false, but her vile husband wanted her dead so that no financial support would have to follow a desired divorce.  A verdict was reached and Soraya was put to death by stoning.

Who thinks he can conceal his wiles

While loudly quoting the Koran.

These words by a 14th-century Iranian poet are written on the screen before the film begins.  Hypocrisy both religious, represented by a phony mullah and the village mayor, and nonreligious, represented by the husband, is attacked in Soraya M. So, of course, is the backward, depersonalizing attitude toward women in the Islamic world.  Soraya’s energetic aunt, played by Shoreh Aghdashloo, tries to save her niece from what is being plotted, but is constantly pushed to the side.  As the stoning begins she is nearly hysterical:  she understands the horror of this brutal treatment.  The stoning sequence is one of the most disturbing things I’ve seen in a movie–infuriatingly bloody and ugly.

Nowrasteh’s film is worthy of comparison with the neorealist cinema of De Sica.  It is a straightforward, grim, compassionate indictment of theocratic authorities in Iran.  Mozhan Marno is first-rate, with her fortitude and anguish, as Soraya. How do you know if Your in Love?

Wow isn’t that the question? How do ya know if your in love? Let’s think about this a bit…  Ever heard the statement:

I love you, but I’m not IN love with you?

So what’s the difference?

There seems to be some different kinds of love floating around. Agape love which would be unconditional love. And then there’s the falling in love with your mate… Of course this would certainly have conditions right?

Now isn’t it just as easy to fall OUT of love as it is to fall IN love? It has to be right? That’s why there are so many divorces and such. That just seems to be the sign of the times.

You could say I been in a few relationships (understatement) and I can say I have loved them all…But was I IN love? Gee… I guess I’ll  never never know..

But there’s always next time around in the love experiences of life. They happen everyday. All that love poetry!

On my next post I am going to consider good looks, lust, and love.  Ya’ll come back now ya hear?