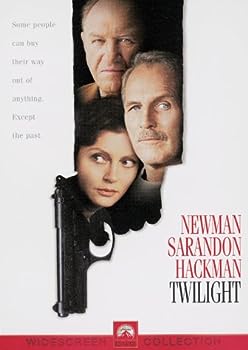 A very fine Paul Newman entertainment of post-studio system film is Butch Cassidy and the Sundance Kid, not the 1998 Twilight.  A very fine detective entertainment of post-studio system film is Chinatown, not the 1998 Twilight.  In this Robert Benton movie in which Newman plays an aging P.I., many of the details are a load of bull, especially in light of how many shootings take place.

Further, most crime dramas of the Sixties and early Seventies are candid but not vulgar (exception: Dirty Harry); Twilight is both.  Floating around is a rumor that Newman’s P.I. had his “pecker” accidentally shot off by a 17-year-old girl.  A man acted by James Garner urinates off his elevated terrace instead of in a toilet bowl, nearly hitting the P.I.  Part of the bull I mentioned consists in these scenes.  About the header on this review, let me say that much of the dialogue alone in the film proves it’s the work of a hack.