Angel And The Duke: The Movie, “Angel and the Badman” 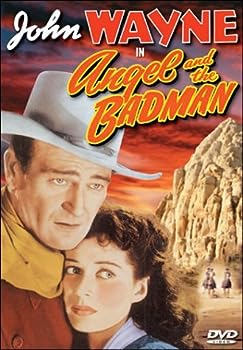 Cover of Angel and the Badman

John Wayne resists being entirely convincing as a badman (a compound word?) in the 1947 Western, Angel and the Badman.  This is the first movie Wayne produced, and he wanted it to have capital acting, but he himself does not really fill the bill.  Gail Russell does, however, as the “angel,” the naive Quaker girl who, like the other devout Friends, approves of generosity and disapproves of violence.  Russell is capable of innocence—and quiet appeal.

Wayne plays Quirt, a man not of the quirt but of the gun, for his outlaw ways.  Harry Carey shows strength and depth as the middle-aged marshal who wants to hang Quirt, and who bluntly tells Russell’s Penelope not to gaze “bug-eyed” at the varmint.  “There’s no future in it,” he murmurs, but Penelope loveth Quirt. . . The beliefs of the Quakers slowly induce Quirt to change for the better, even if he retains a take-charge, aggressive mind.  Except at the very end, this change is presented subtlely, wisely, in director James Edward Grant‘s script.

Besides Russell and Carey, other actors shine here as well.  Probably the only dreadful performance is by Lee Dixon as Randy McCall, Quirt’s former partner in crime.  Enacting a slimy nerd, he’s facetious.