Matt Dillon‘s drug addict and thief in the 1989 film, Drugstore Cowboy, declares that no one can talk a junkie out of being a user.  The pic is so dark that apparently this includes the junkie himself: he is incapable of such a feat.  It is not so much the drug life DC‘s script is bleak about, although it is, as life itself, a vision director Gus Van Sant delivers with fey, carefree poetry and brittle humor.  It is the best Van Sant film I know of.  Only standard-issue acting emanates from Kelly Lynch and Heather Graham, but Dillon is outstanding. 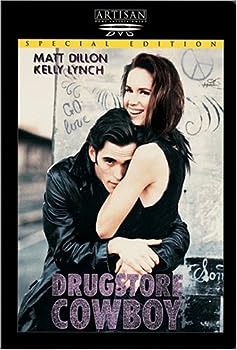