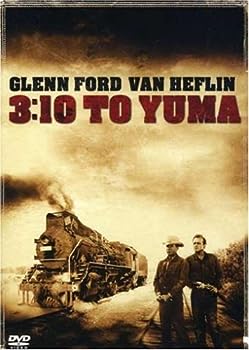 A big sky above a stagecoach moving across the plain in a true long shot—now this is a title sequence for a Western—and this particular Western is the original 3:10 to Yuma (1957), not the Aughts remake.  This is the good one, adeptly directed by Delmer Daves and starring Glenn Ford as the robber-killer who must be escorted to the 3:10 train to judgment-seat Yuma.

The man escorting him is a financially strapped rancher (Van Heflin), doing it for money.  The train can be caught in tiny Contention City, appropriately named because, for sure, contention is coming from reprobate underlings who wish to rescue Ford. . . Arising in the film is an interesting interaction between lawful people (Heflin and many others) and unlawful people.  They’re thrown together enough that Ford necessarily eats dinner at Heflin’s home and gets intimate with the female bartender (Felicia Farr) oblivious to the robber-killer’s awful doings.

Adapting an Elmore Leonard story, Halsted Welles did some bang-up writing, despite the limited realism.  At the end it is VERY limited, and all in all Ford’s character receives a bit more sympathy than he deserves.  But what a decent Western this is!