Don’t Wanna Be “Seduced and Abandoned” – A Movie Review

1963’s Seduced and Abandoned, which received a Big Apple showing in 2007, was said by someone at New York magazine to make Judd Apatow’s film, Knocked Up, look tame by comparison.  That it does, and like Knocked Up, Pietro Germi’s Italian gem concerns a non-slutty female who gets pregnant outside marriage.

An adroit Stefania Sandrella stars as Agnese, the seduced and abandoned one, a Sicilian girl of 16 defiled by her sister’s fiance, Peppino (Aldo Puglisi).  It’s statutory rape, even though Agnese’s father, Don Vincenzo Ascalone (an outstanding Saro Urzi) gets furious with both Peppino and Agnese.  As puny as a worm, Peppino refuses to marry the violated girl because now she is no longer a virgin!  It’s a matter of honor.

Acridly, hilariously satirical, Seduced exposes Honor pursued and safeguarded in the face of, and regardless of, utter hypocrisy.  Superficiality prevails, while that which is DIShonorable keeps coming to the fore (Peppino’s finally agreeing to marry Agnese just to stay out of jail, Don Vincenzo’s plan to murder Peppino).  What Germi’s movie displays is a healthy old-style liberalism, albeit one with a limited but genuine respect for such institutions as the Catholic church and the judicial system.  No love for anarchy here.  It’s just a daring dark comedy, one of the finest I’ve seen.

(The film is in Italian with English subtitles.) 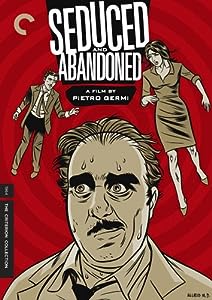