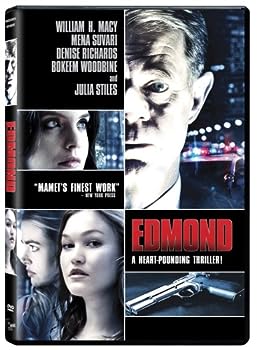 Indisputably, people don’t know why they exist.  Are they in hell?  IS there a hell?  Edmond, the anti-hero in Stuart Gordon‘s film Edmond, would like to know.  Really, it is David Mamet‘s film too; he authored the script and Edmond is the 2005 screen version of his Eighties play.

His protagonist (William H. Macy) leaves his wife and wanders into an ugly urban environment, one requiring too much money for a prostitute and a measure of furious self-defense.  Temporarily losing his mind, Edmond knifes to death a waitress played by Julia Stiles.  Along with being intelligent, the film is unspeakably grim and, in the end, grimly perverse.  Which is why I don’t like it.

As it happens, hetero Edmond gives in to, and starts an intimate relationship with, an incarcerated black man who threatens to kill Edmond if he doesn’t sodomize the creep.  It’s an instance of prison rape.  Mamet means this to counteract Edmond’s earlier racist outbursts after some black-on-white crime occurs, for his protag, you understand, enjoys the relationship.  He takes comfort where he can find it, but it’s an unacceptable counteraction.  No true insight, no true uplift, and not much plausibility exist in this. . . Until the finis, Mamet’s screenplay (and play) is savagely honest, but also too hideously pessimistic and sans the brilliance of the play Edmond is famously reminiscent of: Buchner’s Woyzeck.