“Gone with the Wind” Will Always Be With Us 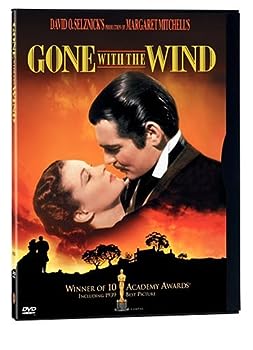 Cover of Gone with the Wind

Does the experience of war ever change people for the better?  In Gone with the Wind, it seems to do so for Rhett Butler (Clark Gable), but not for Scarlett O’Hara (Vivien Leigh), who retains her rotten soul. . .  After a war’s catastrophe, it is often the quality of determination (such as Scarlett’s)—not, alas, morality—that springs up and creates a person’s destiny.

The 1939 Selznick-produced blockbuster has many weaknesses, but it certainly has its strengths as well.  One can’t help admiring its scope, its epic reach, but it is also rich and insidiously seductive enough to be a thoroughgoing crowd-pleaser.  Though its last hour is too episodic, GWTW ambles on until it becomes what one might expect it never to become:  a properly transporting period piece, however fantastic.

Further, Vivien Leigh, whose high-pitched speech might be an irritant to some, is rightly and fascinatingly vivid as Scarlett.

Cropped screenshot of Vivien Leigh from the trailer for the film Gone with the Wind (Photo credit: Wikipedia)