Have Fun With “Sudden Fear” (The Movie) 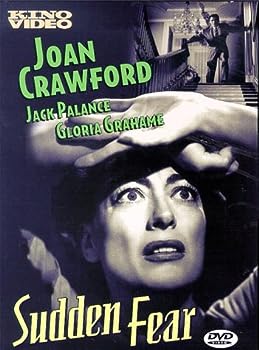 Revived this month in a New York City theatre, the 1952 thriller Sudden Fear, by David Miller (who?), presents love being replaced by self-preservation, both belonging to Joan Crawford‘s Myra Hudson.  Myra adores, and marries, the unscrupulous actor Lester (Jack Palance) but he starts making out with an old flame (Gloria Grahame), who hatches the idea that the two of them should murder Myra for money.

It’s riveting stuff, nicely justifying its title.  With an often sweat-drenched face—playing an armed self-defender who does not want to kill—Crawford deepens the film.  And Palance and Grahame are not without their unique appeal.