Larry Stevens (Dick Powell), the main character in It Happened Tomorrow (1944), is a newspaper reporter who miraculously receives, for several successive days, tomorrow’s newspaper with tomorrow’s news—i.e., the future is revealed—and he begins to exploit this marvelous knowledge.

The story is set in America in the late 1800s, and it is interesting to see such a setting without the presence of cowboys and cattle ranches.  But like the Western stuff, It Happened Tomorrow is a fantasy.  It was directed by Rene Clair of France, active in Hollywood for a while, and everything Clair touched turned to pixie dust.  He kept his movies nicely fey: this one is an enchanting comic Twilight Zone, and a soothing love story.  Tain’t original:  the film derives from a play and a novel, but Clair makes it his own. 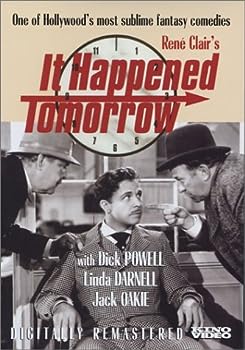 Cover of It Happened Tomorrow