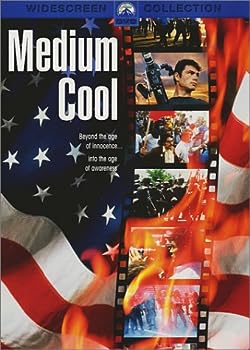 In the 1969 picture, Medium Cool, Robert Forster skillfully purveys a TV photographer’s calm extroversion and no-nonsense defiance.  He is true, and Peter Bonerz, as the sound man, is even truer.  Verna Bloom (as Forster’s love interest) does everything possible to create a complex character, and shines with authenticity and poise.

There.  I comment on the acting because, seemingly, far less has been opined about it than about everything else in this Haskell Wexler film.  Highly topical in ’69, it is partly about social agitation and, especially, violence in what used to be present-day America.  Its flaws have been well explained by critics like William Pechter, which flaws, I believe, sink Medium Cool.  Though very imaginative, it’s a New Lefty political film which goes almost completely awry.

It is set in Chicago, indeed the 1968 Democratic convention in Chicago.  Talk about violence.  Consider today’s violence in Chicago, New Lefties.  Murder on top of murder.