“Music and Lyrics”: For A While It’s A Funny Treat

In Marc Lawrence’s Music and Lyrics (2007), Alex (Hugh Grant), a forgotten singer once a part of the raved-about PoP! band, gets a chance to write a song for, and record with, a currently famous pop queen called Cora Corman (Haley Bennett).  Lacking any talent for lyrics, Alex begs a stranger—Drew Barrymore‘s Sophie—with a certain poetic sensibility to churn out some words for him.  Not only do they naturally fall in love, they also struggle with the song and face the threat of severe artistic compromise, thanks to someone who represents “Buddhism in a thong,”:  namely, Cora.  That phrase in quotes belongs to one of the flick’s many one-liners, that which makes Music and Lyrics a funny treat until it starts limping with no hope of recovery.  Dramatically crippled by Sophie’s character and, finally, some weak acting, the film proves it was made by a man who doesn’t know what he’s doing. 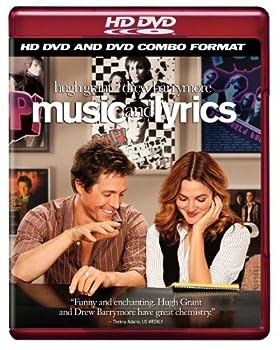