“You can’t compare yourself to God.”

“Am I not God’s image in your eyes?  Is it not to me that you owe your taste for a certain kind of perfection?”

This exchange of words does not take place except in the imagination of Dr. Paul Courreges, the main figure in the Francois Mauriac novel The Desert of Love (1925), which exchange is between Courreges and the woman he has long been passionate about (and it ain’t his wife): Maria Cross.  Doubtless Maria is the kind of woman to see “God’s image” in a man she falls for, but Courreges, it turns out, is not that man.  Yet the doctor still loves Maria, whereas she gradually falls for Courreges’s son Raymond.  What the novel directs us to is, on the one hand, the deep secularization of French society and, on the other, “the desert of love” one encounters after connections are made with the desired person.

Very little is working out for these characters, and not a one of them adheres, as Mauriac did, to any particular religion.  The Desert of Love is very solemn and even tragic, though with Christian overtones.  Although God is seldom mentioned in the book, when He is, the references are not only sobering but also encouraging.  Example: “There could be no hope for either of them, for father or for son, unless, before they died, He should reveal Himself Who, unknown to them, had drawn and summoned from the depths of their beings this burning, bitter tide.”

To think that God would summon from a person a burning, bitter tide!  I was prompted to use the word “encouraging” for a reason. 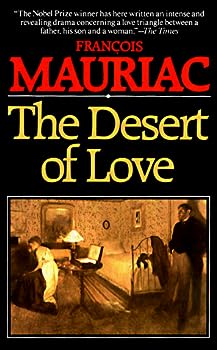 Cover of The Desert of Love