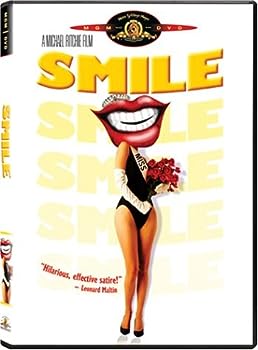 The 1975 film, Smile, directed by Michael Ritchie and written by Jerry Belsen, is a morally searching comedy about a California teenage beauty pageant drenched in insincerity.  Contest officials include extroverted Brenda (Barbara Feldon) and mobile-home salesman Big Bob Freelander (Bruce Dern), both of whom are generally amiable but also inclined, without knowing it, to morally settle:  settle for something less than what character demands.

Brenda, for example, is wholly devoted to the pageant but frigidly keeps her sad-sack husband, Andy (Nicolas Pryor), at bay.  Now Andy drinks.  But such facts must never be revealed in the sphere of pretense the California town has constructed.  Men here are frequently lecherous, ogling the young contestants who are innocent in several ways but can demonstrate selfish ambition as well.  Smile is satire, often Swiftian but also humane; and it resembles traditional satire (the best kind) in that it purveys a standard of goodness in the course of its action.  This standard is the behavior of Robin (Joan Prather), a humble, unhypocritical girl who loves, and is loved by, her widowed mother.

However, the film is not satire only.  It is occasionally non-comedic: not meant to be funny.  And its people often cease to be objects of jabs and ridicule, since, for one thing, they will do something admirable.

Certifiably Smile is flawed but, too, it is smart and interesting.  It has splendid wit.  It was written originally for the screen and it boasts a talented cast as long as some of the supporting players are excepted.  But Dern, Annette O’Toole and others are savvy comic worthies.  Further, a young Melanie Griffith (0ne of those mediocre supporting players) appears topless, but it isn’t gratuitous.