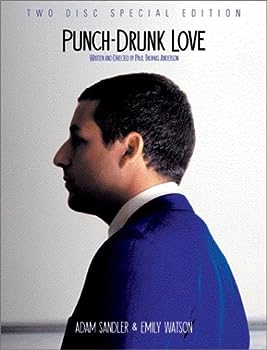 Paul Thomas Anderson‘s Punch-Drunk Love (2002) is an existentialist romantic comedy.  The protagonist is a severely frustrated misfit (Adam Sandler) who meets a girl who is gaga over him.  What hinders it from working is a rotten subplot wherein Sandler encounters a crooked phone-sex girl and her unprincipled employer; naught but the lamest absurdism is in this.  Virtues include Anderson’s jittery, intimidating mise en scene (the birthday party, the car wreck, etc.) and Jon Brion‘s strange, take-charge score.  Also, the film is often funny but, to me, too eccentric.