Sex and Brutality in the Original “Straw Dogs”

In 1971’s Straw Dogs, a Sam Peckinpah film, a fearful, reluctant man must prove he is a man by battling macho fools.  The man is David (Dustin Hoffman), an American mathematician who moves to a Cornish village with his English wife Amy (Susan George).  There, hayseed barbarians subtly disdain David before turning to viciousness and, against Amy, rape. . . Though riveting, the film is rather incompetently written and sometimes technically clunky.  Sometimes, I say.  At other times Peckinpah directs brilliantly (and uses three editors), as in the scene where David sits in his car and observes the sudden slapping of the “village idiot’s” face.  Or when the church social is presented with utter ominousness as the cross-cutting goes hell-for-leather.

The rape scene is actually a rape-and-sodomy scene—shown in the X-rated DVD version—and it’s unsettling.

I don’t really consider Straw Dogs a success, but Peckinpah was gifted and, unless you’re offended by Susan George’s bare bosom, I don’t wish to dissuade anyone from seeing the film. 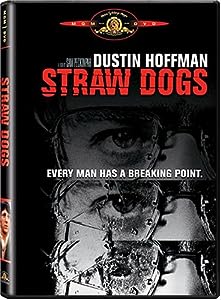