If you’ve never seen Carmen Miranda, you’ll be introduced to her almost immediately in Busby Berkeley‘s 1943 The Gang’s All Here. She takes her charisma beyond the movie’s beginning to the bananas-and-strawberries number and way beyond that to the movie’s finish, and is the best thing here.  But it’s a picture replete with performers, indeed tending happily to give everyone a chance (as it were): to sing or dance or both.

A true success, Alice Faye sings (e.g., the lovely “Journey to a Star”).  Sheila Ryan dances, stylishly.  A fellow named Johnny Duncan jitterbugs.  Benny Goodman is in the film and, notwithstanding he has an acceptable voice, is an indifferent crooner.  His band sounds great, though.

With The Gang’s All Here, Berkeley’s 1930s escapism continued into the Forties during WWII, albeit certainly the flick did its pro-America wartime part.  But it isn’t really this that gives the movie high respectability—this being a musical entertainment, why would it?  It’s Miranda. Cropped screenshot of Carmen Miranda from the trailer for the film The Gang’s All Here (Photo credit: Wikipedia) 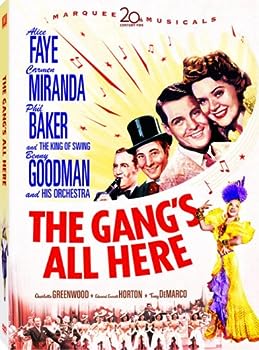 Cover of The Gang’s All Here