Re Traffic (2000), I like this movie’s thoughtful rejection of the U.S. war on drugs, but not its relative lack of sophistication.  Michael Douglas’s newly appointed drug czar has a teenage daughter constantly hungry to shoot up, and Douglas’s wife (Amy Irving) has known about it for months without breathing a word to her husband.  Two DEA agents (Don Cheadle and Luis Guzman) are stupid enough to let their sole informer in a big narcotics case get poisoned while eating breakfast.  A married socialite (Catherine Zeta-Jones), attempting to protect her little son from her drug-dealing husband’s creditors, knows exactly how to deal with assassins and aggressive pushers.  All this and more are too improbable to pass muster.  One critic complained that Traffic is insufficiently exciting, but in my view the trouble is that it’s naively, immaturely written.

It’s ambitious, though, however indifferent I am to director-cinematographer Steven Soderbergh’s gussied-up style.  Not that this style is never powerful, what with its handheld camera, bright light and graininess.  It’s just that it’s rather showy and generally unnecessary—in truth, neither good nor bad.  By contrast, the acting is often superb.  Cheadle and Guzman, to give two examples, offer some nice variation and even nicer facial play.  Douglas and Benicio Del Toro are winningly manly, perfect as authority figures. 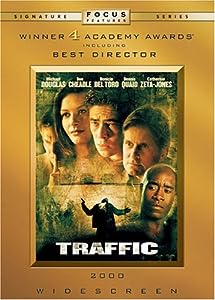