The Stark Original: “All the King’s Men” 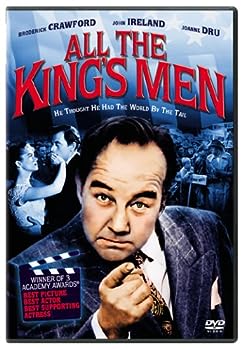 Cover of All the King’s Men

The 1949 All the King’s Men is crisp and fluid as it tells of a flatly indecent governor (Broderick Crawford‘s Willie Stark).  It has a better, if blemished, script than Citizen Kane, another film about a powerful man, because it’s adapted from Robert Penn Warren’s novel.  There is recklessness and perfidiousness that remind us of Jack Kennedy and Ted Kennedy (Chappaquiddick), and demagoguery that reminds us of many of the most offputting politicians.

I would declaim to my dying day that the remake of King’s Men starring Sean Penn is a stupid movie, but that is not my opinion of the ’49 original.  Moreover, most of the chief cast members in the ’49 film actually outact the later chief cast members, with a Crawford who is not mannered at all, purveying a Willie Stark who is not a caricature.  For all this, why the former newspaper reporter (John Ireland) stays with the naughty Stark to the end is anybody’s guess.