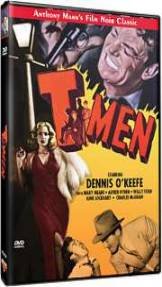 T-men, in T-Men (1947), are agents of the U.S. Treasury Department’s law enforcement division.  Early on, the movie more or less informs us that these taxpayer-supported agents do not make that much money (lest moviegoers then were understandably worried about massive federal spending) and, anyway, the story begins with a murder!  Treasury has its work cut out for it.

What happens is that an informer is killed by counterfeiters, and off go two likable-looking T-men (Dennis O’Keefe and Alfred Ryder) to infiltrate the band of culprits.

This is recommendable film noir, better than most pics at presenting the unusual nature of crime investigation.  Granted, the characters are ciphers, but this was perennially the case in old crime movies, and at least the drama in T-Men is rough-and-tumble fun.  What’s more, there are two alluring femme fatales, played by Mary Meade and Vivien Austen (shamefully uncredited; she plays Genevieve).