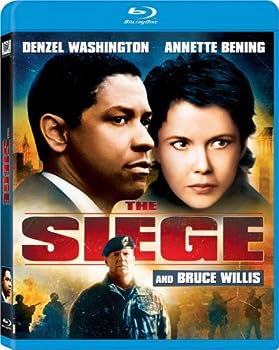 Cover of The Siege [Blu-ray]

The Siege is exciting balderdash.  Do I accept it?

Not when the balderdash is this strong.

About the only item to be taken seriously here is that, even in 1998, Arab terrorism in the United States is, to whatever degree, a continual threat.  The most preposterous item is that a U.S. army general, during a state of martial law in New York City, becomes so brutish as to torture and even kill an Arab who is an American citizen.  Or is the martial law itself the most preposterous item?

The CIA agent Annette Bening plays, by the way, is there when the torture goes on, and why she tolerates it is hard to fathom.  Patently the filmmakers were dreadfully sloppy in creating her character:  she is a pleasant woman made to look like an utter fool.  Little does director Edward Zwick know it, but virtually the same is true of the film’s black hero, the FBI agent played by Denzel Washington.  Poor Zwick.  He’s making a mockery of his liberal principles without knowing it.