Winslet and Her “Little Children” – A Movie Review

Kate Winslet is commanding but never hammy.  All the anxiety, ambivalence, femininity, and intelligence of the character of Sarah in this Todd Field movie Winslet supplies.  She’s the best thing in it.  An adaptation of a Tom Perrotta novel (which I’ve never read), Little Children doesn’t make the grade, though.  Winslet’s suburban wife becomes an adulterer in this almost dated tale of unhappy suburban sinners, and what ensues, I’m sorry to say, is a forced, uneasy denouement in addition to an uneven tone.  The film is inferior to the same director’s flawed but worthwhile In the Bedroom (2001).  I disagree with critic Dana Stevens that Perrotta, who co-wrote the screenplay, “is a natural match” for Field.

Field has an artistic eye, after all–he uses depth of field as though he invented it–and his scene creation is better than the script.  No doubt LC was not the novel he should have filmed. 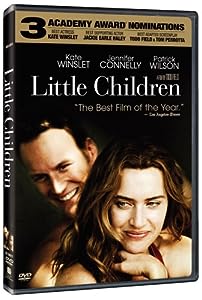