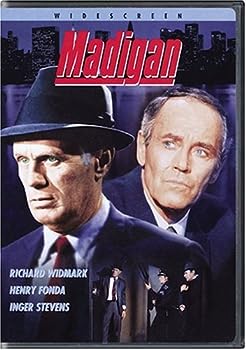 A police tale meant for adults, Don Siegel‘s Madigan (1968) is sort of a superfluous film without being a bad one.

It makes clear what we already know:  Cops are only human, notwithstanding Detective Don Madigan (Richard Widmark) is essentially a mensch.  Like other cops.  Yes, he mistakenly lets a thoroughgoing bad guy (poorly played by Steve Ihnat) get away, but he proves competent enough for the center of the film: retrieving the creep.

Madigan is married to a selfish wife (Inger Stevens), but when the film focuses on the pair, what’s missing is a point of view.  In fact, there is somewhat more of a character study of Henry Fonda‘s police commissioner than there is of Madigan.  Too bad.  But Widmark, Fonda, Harry Guardino and others are absolutely fine, whereas the acting of Stevens, the American Catherine Deneuve, is no better than that of Deneuve.

Another thing:  It’s 1968, and New York City is starting to become really heinous.