A Fine “Finishing”: “The Finishing School” – A Book Review

I like the fact that, as at least one critic has indicated, it is not the ordinary things people do in Muriel Spark‘s fiction that ultimately matter.  Rather it is their sins and, implicitly, their standing in the cosmos that matter, although this is never examined gravely or angrily.  Spark uses wit: she does so in 2004’s The Finishing School as she concentrates on Rowland, a would-be novelist, and Chris, the 17-year-old libertine whose seeming writing ability Rowland is madly jealous of.

Rowland is married to Nina, but there is no bona fide love between them.  He may be homosexual, but this is unclear in a way his “envy of another’s spiritual good”—a catechism phrase—is not.  That’s right: Chris’s artistic writing talent, if it actually exists, is seen as a spiritual good.  And, as seen by the Catholic Muriel Spark, Rowland’s “obsessive jealousy” is “his greatest affliction.”  Without spiritual truth, both Rowland and Chris have little or nothing going for them.

The Finishing School is clever and meaningful and probably wittier than such Spark novels as The Prime of Miss Jean Brodie and The Girls of Slender Means.  It lacks, however, the viable drama of those works, and yet an irresistible intelligence saves it from any kind of hard judgment I might give it.  You did it again, Muriel. 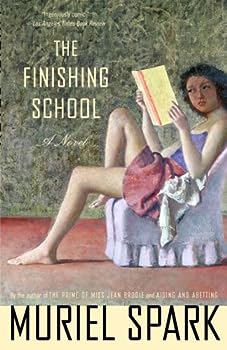 Cover of The Finishing School