A Movie With An Intriguing Title: “House of Sand and Fog”

In House of Sand and Fog (2003), Jennifer Connelly plays Kathy, a discontent ex-boozer evicted by mistake from the house her father left her.

Ben Kingsley plays Colonel Behrani, once in the Iranian army and now an American citizen, who buys the seized house, orders a bit of remodeling, and then puts it on the market at an outrageous price.  The county refuses to buy it back for such a sum despite its incompetent conduct toward Kathy, and she, poor lass, must remain homeless.  A helper, Deputy Sheriff Lester Burdon (Ron Eldard), comes to her aid, even starting a love affair with the evictee, but is another woman’s husband.  His vigilante actions only make matters worse.  Kathy, to be sure, fights for her property but, although she gains some sympathy from Behrani and his family, feels helpless and suicidal.

‘Tis a world out of joint, with all its lost souls, in Vadim Perelman’s film.   The 1999 book by Andre Dubus III, of which this is an adaptation, is yet another novel I have not read, but I hope it is more convincing than the last one-third of this movie.  House becomes unwieldy, loses its way.  The other two-thirds, however, are extraordinarily good:  a true, effective American film for adults.  It moves at a perfect speed and exhibits an interesting verisimilitude.  It is sad without being depressing.  Neither the sex nor the brief nudity is gratuitous.

For Connelly’s first-rate performance—she is equal parts fragility and fed-up bluntness—and for the first hour and a half of the picture, I recommend House of Sand and Fog—really, a potential masterpiece. 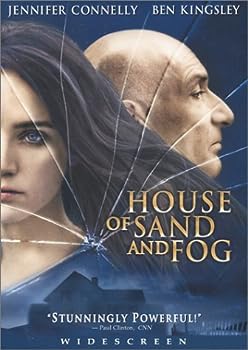 Cover of House of Sand and Fog